Difference between revisions of "Sentinel Vs. Vanguard" 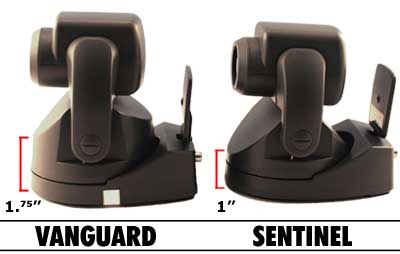 2. Inverted image - As the camera is intended to be inverted, the image from Sentinel’s sensor is inverted by default to view on the TV or computer.

3. Increased pan – when ceiling mounted, the Sentinel camera can almost pan 360 degrees (actual field of view is 330 degrees) so that you only need a single camera to monitor the whole room. Vanguard, on the other hand, was designed for wall mounting and only has a field of view of 230 degrees (in a ceiling mounted application, you’d need two Vanguards to cover a single room).