How can I find out if ActiveHome Pro is hearing noise on a specific house code?

The Find Other Computers feature shows which X10 addresses you are using, and which ones are being used by another system. 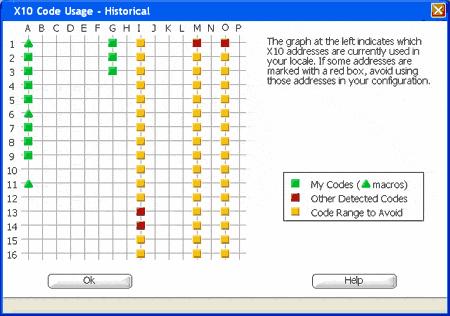 The window shows you a grid of all the X10 addresses, and marks the ones that have activity. Green marks indicate addresses used by the current ActiveHome file. Red boxes show you other addresses where command activity has happened. Yellow boxes are places where there might be activity that's not part of your ActiveHome setup. Yellow boxes might be a neighbor's system, but more likely they indicate line noise. Avoid using House Codes with yellow boxes.

If you hover your mouse over a green spot, you'll see the module name and the last time a command was sent or received for that module.

You can also hover over read boxes to see when commands were received for those addresses.